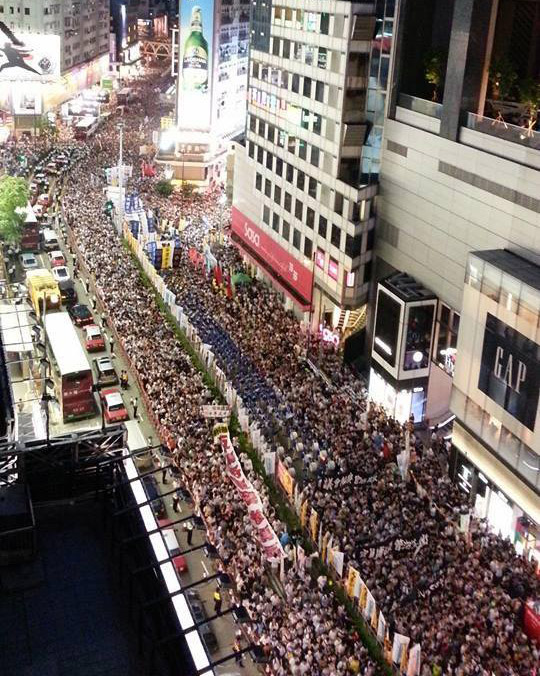 To speak on behalf of the majority of Hongkongers who have been pursuing freedom and democracy for decades, I am writing to urge the BBC to expend the coverage on the democratic situation in Hong Kong in order to make the world aware that China has been maliciously handling Hong Kong just like what they have been doing to Tibet and other minorities in the country. Frankly We have been very disappointed with the BBC and the likes of the prestigious international media for failing to cover the gradually deteriorating human right and democratic situation in Hong Kong.

This year is the critical time for the future of Hong Kong. Not only because the Hong Kong government has been ferociously undermining our autonomous government body and our local cultures under the influence of the central government of China, but also China blatantly violated the “One country two systems” agreement between Britain and China by releasing a white paper in which it reinterprets “One country two systems” in June this year.

Stating that our sovereign power is strictly limited to how much the central Chinese government is willing to delegate, the white paper delineates the sovereignty of Hong Kong, and it also claims that the leader of Hong Kong has to be patriotic to both China and Hong Kong. In this case, in other words, it simply implies that the chief executive of Hong Kong must be a pro-Beijing politician. This revision to the One Country Two System policy is an alarmingly vile and destructive measure from the central Chinese government side to take over Hong Kong.

On top of this, a week ago, the legislative council forcefully and, allegedly, unlawfully passed a bill that blurs the border between Hong Kong and China intentionally regardless of a series of lengthy large-scale protests and the backlash in the society.

We have been crying for international help and tried to plead with the British government for urgent involvement, but to no avail. It comes to the point that we pretty much suspect it might boil down to the ubiquitous political pressure from China, the fastest-growing economy on earth. Hong Kong is going to become – or has already become – an authoritarian regime, and the Hong Kong government, which has completely lost its credibility, is not a government we can rely on whatsoever. We, therefore, urgently need international attention and support. Please, restore our trust in humanity and the trust in the BBC and the like.